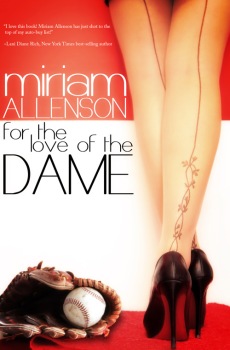 My award-winning first book, FOR THE LOVE OF THE DAME tells the story of a man who loves his son but is afraid to show it; and a woman who thinks the only way she’s going to find happiness is through success in her career. When these two get thrown together, it’s a disaster. She thinks he’s out of her league. And he thinks she’s a flake and an oddball.

Major league baseball player, Car Bradford, is facing the end of his career and an ex-wife whose behavior is so erratic she’s endangering the welfare of their son. His entire focus is on taking that control away from her.

More than anything, Italian, Sofia de’ Medici, wants the director of a New York opera house to let her sing Carmen, the role she’s dreamt about singing her entire life. Every attempt she’s made to get an audition with him has failed.

Sofia’s mentor—who happens to be Car’s boss—throws them together so a reluctant Car can help Sofia get her dream role. That’s when the sparks begin to fly.

To find out how Car and Sofia get from blackmail to bliss get yourself a copy of FOR THE LOVE OF THE DAME.

GET THE NOVEL READERS ARE CALLING “PURE ENJOYMENT,” “COMPELLING,” “CAPTIVATING,” AND “A REAL PAGE TURNER.” 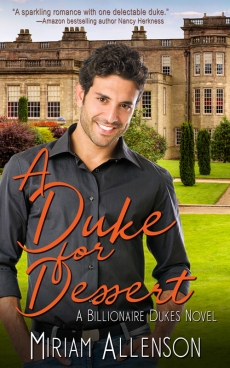 A Duke for Dessert – Book One in the Billionaire Dukes series

She thinks he’s heartless. He thinks she’s a hellion. They didn’t plan on falling in love.

Charlie Camville is the duke of Lindsey and a billionaire. He’s laser-focused on restoring the family fortune and reputation after his father destroyed both. Annie Lukin is chef-owner of a Best of Britain award-winning restaurant and the champion of a community garden for the children of the impoverished Lincolnshire village where she lives. When the garden is destroyed, she confronts the heartless aristocrat she believes is responsible.

But Charlie isn’t responsible for the garden’s destruction. Nor is he heartless. As they work together to fix the problem, Annie finds herself increasingly unable to resist the hot, funny, big-hearted man she never thought she could like. And Charlie finds himself falling for the smart-mouthed, generous American woman who was so not on his radar. When Annie’s enemies uncover a shameful secret from her American past, Annie has to make a choice. Does she want to prove she’s worthy of Charlie’s love?

Or must she sacrifice that love and give him up forever?

Get your copy of the delicious A Duke for Dessert!

Sign up to my newsletter for advance notice of new releases, giveaways, and 99 cent deals ... plus outtakes, info on where my ideas come from, tidbits of what I’ve written already, and occasional observations on life as a writer.

A Duke for DessertMarch 31st, 2019
Book One in the Billionaire Dukes series She thinks he’s heartless. He thinks she's a hellion. They didn't plan on falling in love.
Website Design by JamieBee Designs
%d bloggers like this: